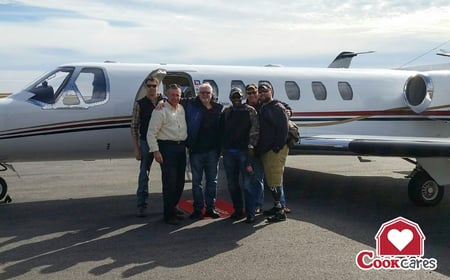 He has participated in more than 35 flights and continues to look for opportunities to give back to these brave individuals and their families.

The organization includes aircraft owners who volunteer to fly combat wounded veterans and their families to events and functions for free, avoiding the difficulties airline travel presents to those with prosthetics. To learn more about the organization, visit their website.

Last Thursday, he had the privilege and honor to complete another mission as part of Veteran’s Airlift Command. This unique mission was in support of retired United States Army master sergeant Bobby Farmer and his fight against veteran suicide.

Master sergeant Farmer also started and is the director of the non-profit organization Operation Warrior’s Path that works to combat veteran suicide.

Operation Warrior’s Path is currently fundraising to establish a 50 acre retreat center in central Texas. This location will be a place veterans can use equine therapy to approach physical and emotions issues related to PTSD. The organization’s work also includes building new homes and repairing existing structures for solders.

Master sergeant Farmer, who was a member of the 3rd Special Forces group, was injured on multiple occasions during 10 separate rotations in Iraq and Afghanistan.

The flight took four wounded 3rd Special Forces group soldiers from Fort Bragg, in Fayetteville, North Carolina, to the first fundraiser for Farmer’s organization hosted in Austin, Texas. To learn more about how to donate to the organization, click here.

At Cook, we are so unbelievably grateful for the sacrifices our servicemen and servicewomen make every day for our country. Veterans like these men provide a strong reminder of sacrifice and dedication. To learn more about another flight Greg Cook completed for Veteran’s Airlift Command, read this post.

We are happy to be able to give back to these special people and a worthwhile organization through Veteran’s Airlift Command.