My Adventures in Container Gardening [VIDEO]

Catie loves to write, and try new things (and wrangling her loved ones into the process). She currently works for a marketing firm in Kentucky where she plays skee-ball, drinks hot chocolate and, oh, writes all day long.

How to Start a Container Garden with a 5-Gallon Bucket

Container Gardening is big right now! Our guest blogger Catie decided to try it out. Follow her adventures in container gardening here: http://info.cookstuff.com/blog/my-adventures-in-container-gardening

You just saw above the quick video of how to put these container gardens together.  A few minutes is all you really need!

But...that wasn’t the case when I first started.  Let me tell you about all the mishaps along the way. Hopefully you won’t drive your spouse or significant other crazy during the process. It’s a wonder my boyfriend is still with me after the many frustrating trips we took to farm and home supply stores to buy or return items.


So, lesson number 1: It always takes longer and more money than I think it is going to. 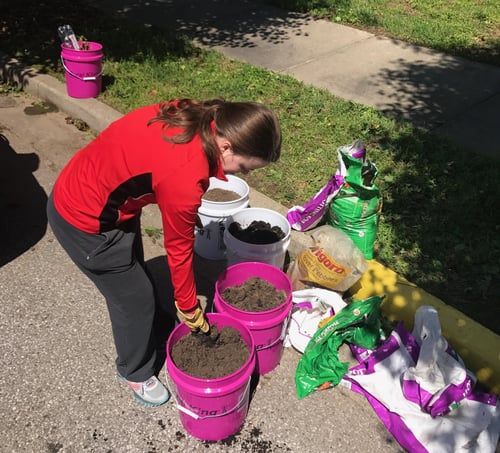 We started out with a mission.  Cheap 5 gallon buckets, some dirt and a couple of plants.  Well, it didn’t quite turn out like that.


The first place we stopped was a local farm supply store, we bought a few large plastic buckets that had been used for cattle feed for a cheap price.  But, the more I thought about it, the more I realized they probably wouldn’t fit on my balcony.


So, we kept the plants, but took the buckets back. Then, we went to a big box store and found some great containers…


And then realized I should have done my math first...


Then, I went back to my original idea and found 6, 5-gallon buckets for under $3 a piece. My budget and I were on speaking terms again.  Only bad thing was it literally took all day for me to buy just the containers and vegetable plants! Ridiculous I know!


On to lesson number 2:  Buying dirt isn’t as easy as it sounds. 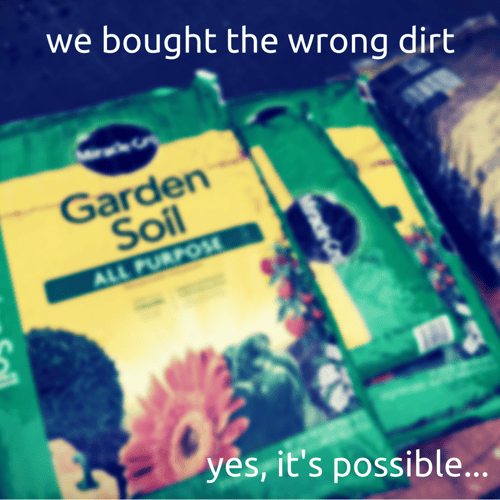 We joked about how our ancestors would have balked at the idea of BUYING dirt. And then they really wouldn’t understand if we told them we actually ended up buying the WRONG dirt…


Yes that happened to us.


I saw the big pretty picture of vegetables on the bag, it told me they would grow my vegetables big and strong. So I bought 10 bags of garden soil.  It was on sale so I was really excited about the deal I was getting.  But, what I didn’t see was the explanation on the BACK of the bag that clearly stated “NOT suitable for containers.”


After opening the bag at home and trying (and failing) to plant some flowers in it, I saw that note and realized I’d bought the wrong thing. But, after talking with some other gardeners I decided to keep it and mix with potting soil.


The potting soil is a much lighter soil so water can penetrate it and get to the roots.  The garden soil has a lot of dense nutrients, so I left it to serve as a fertilizer.


What’s lesson number 3? This lesson I’d heard all my life but didn’t realize how frustrating it could be until now.  I was ready to plant. I had all of the supplies (finally!) and felt ready to go...but then my grandad told me I was “in the wrong sign.”


What does that mean? Well, I’ll explain it in depth in a later post so keep coming back to Cookstuff.com!  But what it meant for me right now, was that I would have to wait another week before I could plant.


Well, I could plant, but it wasn’t recommended by the man who has been gardening and farming successfully for most of his life.  So we waited until the next weekend to plant our little garden.

*UPDATE: I failed to tell him that I wasn't starting from a seed, so I didn't have to wait after all! The "plant by the signs" rule only applies if you're starting with a seed. Sigh*


So, that brings me to lesson number 4: As frustrating as this experience has already been, it’s challenged me in a new way. I’ve had to take my hands off the keyboard and put them in dirt (which I generally try to avoid). 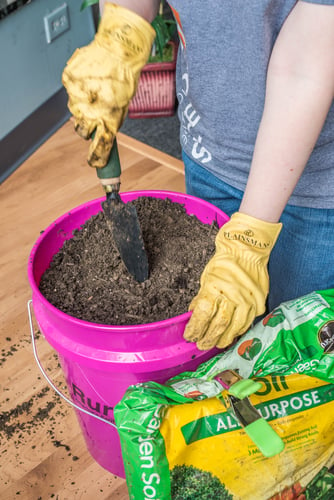 I was able to learn, yet again, that I like having a plan, but when it goes awry, that doesn’t mean I can’t still move forward.  By the time the dirt fiasco happened I was almost ready to give up.  But with a little encouragement and being reminded that I wasn’t doing this all alone, my determination was refueled.


I also learned that my boyfriend and I don’t just watch Netflix well together, we work well as a team too! He navigated my frustrating quirks that day with patience and laughter, and I learned to listen to his advice and encouragement instead of staying inside my own head all day.

(Extra props to him for carrying all of those heavy containers of dirt up a flight of stairs to my balcony...there's no way I could have done this alone. That dirt is HEAVY!)

What advice do I have for you?

Give it a try!  The idea of having some of our favorite vegetables to pick straight from my balcony still sounds wonderful to me.


I’m not sure my garden will thrive, but I’m excited about all the lessons I’m learning and the challenges I’m overcoming along the way.  So, let’s be a little adventurous together and start a container garden!

Also, if you’re looking for more garden tips, videos and instructions on how I put together my garden, look here!

Container gardening can be done on your balcony, back patio or even beside your actual garden.  Plus, you can make it a family event!  If you’re needing more space for your garden supplies, think about purchasing a Garden Shed or Utility Shed from Cook, these are popular with gardeners and families alike! 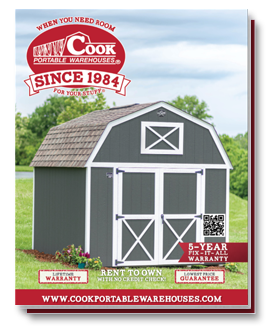