A Walk Through Mandy's Cub House

The Chicago Cubs may not be making it to the playoffs this year, but that isn’t deterring this family. Their love goes deep and flows right into their transformed Cook shed they named, “Mandy’s Cub House”.

A few years ago, Mandy decided she wanted a shed of her own. Todd had his tools and workspace, but she wanted a She Shed. “A lot of moms they don’t have a lot of personal time. It’s always Mom this and Mom that. This shed is hers,” Todd explained. So, Todd began dreaming up how to put together this little club house.

“I had perfect ideas for it. It worked out well because we paid on it for like 2 years and then paid it off,” Todd said, noting that he liked that he could pay it off at his own pace. The warranties and the flexibility with Cook were important to them. They worked with Cook to ensure they got exactly what they needed. His only regret was not adding another door in the back part of the shed for even easier access. His advice? “Always go bigger than what you think you need.” 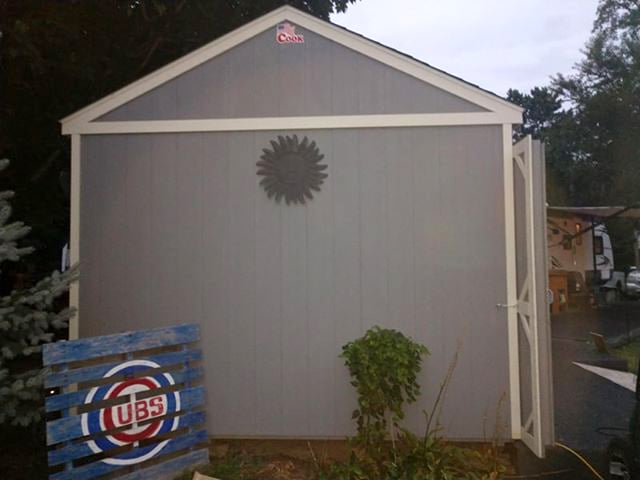 They decided on a gray and white 12x16 Utility Shed, adding a window, shutters and flower box to the design. Once it was paid off, the transformations began, starting with insulation, drywall and electricity. He put in the insulation himself which was one of the most challenging parts. “It just itches me to death!” Todd recalled.

Here’s a glimpse at a few of his favorite modifications: 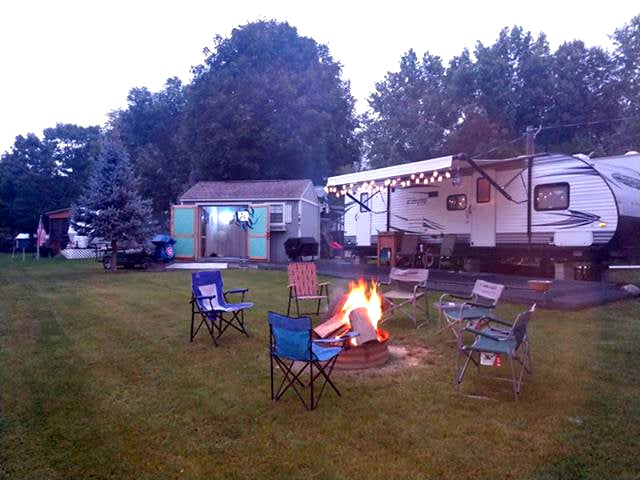 “Since it’s at the campground, I could only work on it occasionally. Mandy helped, but when it got closer to being finished, I took over. I had the neon signs made and decorated it with pictures and old ticket stubs,” Todd said. “This wasn’t just a She Shed this was Mandy’s Cub House.”

When he finished, a friend liked it so much he purchased an even bigger Cook shed for his hunting equipment.

Even though the Cubs’ season is over, they still enjoy showing off their masterpiece and entertaining there. It’s a great place to relax or play card games. Maybe next year they’ll watch the World Series inside and see a Cubs win!

**NOTE: Electricity should be put in by a professional if you add this to your shed. Also, any transformations need to wait until after the shed is paid in full as part of the rental agreement. If you’ve transformed your Cook shed, we’d love to see it! Send us a message on Facebook and you might be featured on www.cookstuff.com too!